Already in Roman times the Marcarolo plateau was a place of exchange and a road junction where the so-called "vie del sale - salt roads" or "marenche" (of the sea) connected the Po Valley with the Ligurian Riviera and specifically with the city of Genoa. In 1200 the Cistercian grange of Bruvera or Riversa was founded, which later took the name of Benedicta,  contributing to the widespread diffusion of agriculture and sheep farming, deeply transforming the ecosystem and favouring the settlement of scattered farmsteads that can still be recognized today and that would last as the productive system until after the Second World War. The Ecomuseum of C.na Moglioni was created to protect and make the cultural heritage linked to the peasant tradition known. The Benedicta also played a role in more recent history, as it was in fact the scene of the partisan massacre that occurred in the spring of 1944, following a raid that affected a vast area of the Apennines and ended with the shooting and deportation of captured partisans. To commemorate these events, the project "La Benedicta Parco della Pace" was born, which includes the monumental area, a dedicated itinerary, a documentation centre, and a museum that is still under construction. The itinerary can be travelled by mountain bike for long stretches. The section between Laghi della Lavagnina artificial lakes and Monte Tobbio is not recommended - alternatively you can go up to Capanne di Marcarolo using the dirt road that corresponds to the itinerary and return to Passo della Bocchetta along provincial roads nos. 165, 166 and 160. 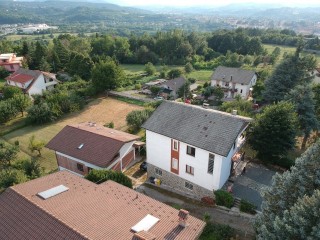 Alessandria | Bed & Breakfast
Villa Tea
Recommended for families, with a fenced-in park equipped with swings and plenty of space to entertain children. We avail of a double room with the possibility to add a cot or bed, another small room with two beds, shared bathroom facilities, a large furnished living room with scenic view of the …
open accommodation information | see on map