A 12 day and 250 km march through Savoy by a thousand men, led by the Waldensian shepherd Henri Arnaud, who fought against the French troops in August 1689 to defend their valleys. This, in extreme synthesis, is the feat of the "Glorious Repatriation" of the Waldensians, which this itinerary celebrates and retraces.

In order to understand the historical reasons for this event, it is necessary to know the history of the Waldensians, initially known as "the poor of Lyon", who for a long time were forced to live in hiding and perpetually sought after by the Inquisition. Dispersed in various parts of Europe, they were particularly concentrated in the Alpine region of the Dauphiné and western Piedmont. When the Protestant Reformation came into being, the Waldensians, who had survived almost only in the Cottian Alps, joined the new perspective of faith and organized their communities along the lines of the Swiss Protestant churches. Subjected to harsh repression by the Dukes of Savoy, they managed to survive thanks to the political situation and the particular geographical reality of their lands.

In 1686, the Waldensians established a population of about 12,500 people. in the valleys of Perosa (today the lower Val Chisone), San Martino (today Val Germanasca) and Luserna (today Val Pellice),

When the Savoy Duke Victor Amadeus II, faithful to the politics of the Sun King, imposed on his subjects of reformed religion to stop all public demonstrations, demolish places of worship and baptize their children in the Roman Church, the Waldensians refused the hypothesis of an exile and decided to resist, thus falling into the harsh repression of the French. Deported to prisons and fortresses, the majority of them died of hunger and only just over 3,000 were able to find refuge in Switzerland. Three years later, in August 1689, the international situation turned in their favour: William III of Orange, who had become King of England, rebuilt the anti-French front with the League of Augsburg and, in the framework of the war against France, financed a military expedition to Piedmont, organized by the Waldensian shepherd Arnaud and consisting of around a thousand men, mostly Waldensian. Having left Lake Geneva on 26 August, they marched 250 km across the Savoy, clashing with French troops in Salbetrand, in the Susa Valley. They finally regained possession of their valleys, and closed in by French troops, found themselves engaged in months of guerrilla warfare and were forced to barricade themselves in Balsiglia, a village above Massello, in Val Germanasca. The attack by the French-Sabaudian troops in May 1690 was about to mark their end, but they were saved by the sudden change in political alliances, which led the Duke of Savoy to go to war against his former French allies. The itinerary that is proposed here finishes at the end of the epic march with the arrival of the Waldensians at the village of Bobbio, in Val Pellice. The feat of the "Glorious Repatriation" has always aroused a lot of interest, first of all for its military aspect: Napoleon was already deeply affected and in 1872 the Italian Ministry of War assigned Captain Gallet to repeat the itinerary on foot. Secondly, the Repatriation was made known from a tourist point of view by various travellers, especially English ones, in search of authentic nature and people capable of living simply. Starting from the nineteenth century, a renewed interest in the event emerged also in the Waldensian church: during the celebrations of 1889, a group of six Waldensians retraced the itinerary on foot from Lake Geneva to the Waldensian Valleys; a similar initiative took place in 1989, this time with the participation of about one hundred people. This route is currently part of the European itinerary project: "The Huguenot and Waldensian Trail", which runs from the south of France through Switzerland to northern Germany.

At each stage end there is at least one restaurant/accommodation, guaranteed during the summer season.

It is possible to arrive at the Lake of Moncenisio from Susa by the taxi/shuttle service. From Bobbio Pellice and from all the other stage ends public transport connections are available. 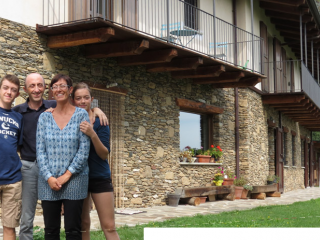